Natalie Fee is an award-winning author, environmental campaigner and founder of City to Sea – a Bristol-based non profit working to stop global plastic pollution at source.

Beginning the podcast by introducing her new book ‘How to Save the World for Free’ – Natalie explains the power of individual action when it comes to healing the planet and how we can all play a part in most aspects of our lives.

Describing her journey as a campaigner, Natalie tells us how seeing the trailer for the film ‘Albatross’, by the artist Chris Jordan opened her eyes to the reality of plastic pollution. The plight of the Laysan Albatross with single-use plastics lodged in their bellies, dying, moved her to the point where she could no longer sit back and do nothing.

This led to the creation of a crowdfunded music video and onto campaigns in her home town of Bristol to highlight the problems of plastic in the UK’s rivers and seas.

To begin with, Natalie guided City to Sea with the Switch the Stick campaign, a successful cotton bud campaign run in 2016/17 which called on all UK retailers to switch from plastic to paper stem buds, stopping over 400 tonnes a year of single-use plastic at source. City to Sea has since launched several groundbreaking campaigns achieving global recognition, including Refill – tackling single-use plastic bottles, Plastic-free periods, Don’t believe the wipe and Plastic-free travel.

Natalie goes on to describe writing as her “first love” and the idea for her book; “ I wanted it to be about campaigning, to take people on the journey from plastic pollution to the other things that are going wrong in the world that we need to be aware of”.

She talks about the single-use plastics directive and the importance of implementing it, how recycling is important, but reusing more so. Natalie points out that 40% of litter is plastic bottles and a deposit scheme would cut this figure substantially. It would also lead to behaviour change. She adds that we need to put value on plastic and discourage bottles being made from fossil fuel. She explains that the Terracycle scheme is good as a temporary solution, but the onus is still on the consumer and introducing extended producer responsibility through the environment bill would be a better long term solution.

Natalie and Safia talk about activism. Consumers have to “keep up the pressure on supermarkets to unpackage a lot of our fruit and vegetables”. They need to lobby councillors about deposit schemes and individually reduce the amount of plastic they use.

Since 1965, over 8 billion tonnes of single-use plastic produced has gone into rivers and soils.  Natalie explains the solution to this is stopping it at source, especially in developing countries. “90% of the world’s plastic flows out of 10 rivers around the world, mainly in Asia”. Natalie describes how working with and supporting NGOs and charities which help manage waste better is important as well as cutting our own plastic waste, 93% of which we export.

Natalie explains how we get plastic out of the ocean. Using technology costs billions to clean up a fraction of plastic. She points out only 1% of ocean plastic is on the surface, 95% is on the ocean floor and 4% is on the beaches.  After reducing use, the next step is to empower community beach cleans to clear up the plastics blown by wind and gathered by tide. Microplastics in the water present a huge challenge, but as Natalie discovered through researching for her book, there are now “more microplastics on our land than going into the sea.” She explains that the microplastics which seep into the water supply when we wash our clothes end up as sludge cake which is spread onto soil as a nutrient.

Safia and Natalie talk about plastic in beauty products. “Pretty much every foundation, lipstick, mascara, eye shadow, it’s all got plastic in it unless it’s organic and specifically mineral based”. Organic makeup comes with a higher price tag, but Natalie points out that the savings you can make just “powering down” on energy use at home would help to cover the extra cost.

Natalie has a low carbon footprint according to her carbon calculator, but finds flying and her car a challenge.  She advocates campaigning for a fair tax on aviation and recommends http://afreeride.org which advocates everyone has one free tax ride a year and then after that pays incrementally more tax as they fly. She advocates this service and explains “It is fantastic and would address the frequent flyers and business travel and make people stop and think about whether they needed to take those flights”.

Safia finishes with a positive and optimistic quote from Natalie’s book:

“We become creators instead of consumers, growing our own food, building relationships with people in our communities and coming up with ingenious new ways of making the most of what we’ve got” 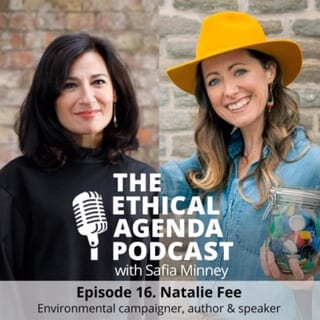