Why Support The Climate and Ecological Emergency Bill?

REAL Sustainability attended this Business Declares event on 21 January 2021. Business Declares is an organisation of business leaders in the UK declaring a climate, ecological and social emergency. The event was convened by Safia Minney of REAL and Ben Tolhurst of JLL and Director of Business Declares. An introduction was given by Green MP Caroline Lucas. The speakers were:

The CEE Bill emphasises the interconnectedness of the climate and natural world. If we decarbonise the economy but don’t stop destroying the natural world we won’t prevent the Earth’s systems from breaking down. Neither the Government nor Parliament is acting with enough urgency. The Bill would enshrine into law the commitment to urgently reduce emissions to net zero and limit warming to 1.5oC in line with the Paris Agreement. The Government’s target of 2050 is too late; the IPCC says we need to halve emissions by 2030 to have a chance of reaching net zero by 2050.

The CEE Bill requires the Government to be fully accountable for all domestic emissions including aviation and shipping. Government and UK companies will be responsible for emissions resulting throughout our domestic and international supply chains – the UK’s entire carbon footprint.

The Bill would also make the UK Government fully accountable for the protection and restoration of UK nature with a focus on biodiversity, soils and natural carbon sinks.

The Bill would also stop unproven, negative emissions technologies being used as an excuse to limit or delay cutting emissions from burning fossil fuels.

Provision is made for a representative Citizens’ Assembly (CA) whereby Government, Parliament, scientists and citizens will work together to create an emergency strategy to achieve the Bill’s objectives without undermining parliamentary sovereignty or our unwritten constitution. The CA will empower MPs to make bold decisions based on best evidence while allowing people to have a real say in shaping the pathways to a fair and just transition to a zero carbon society and thriving natural world.

A CEE Bill Alliance is being built from grassroots groups and across society;- NGOs, businesses, MPs and political leaders, councils, faith groups and unions.

NASA has reported that 2020 was the hottest year on record with wildfires raging in the US and Australia and also in the arctic. According to WWF’s most recent Living Planet report, population sizes over the last 50 years of mammals, birds, fish, amphibians and reptiles have fallen by a massive 68%. However, even if all the Paris Agreement pledges are met we will still be on-track for over 3oC of warming. According to the UN Environment Programme, 3oC of warming would bring mass extinction and large parts of the planet would be uninhabitable.

The UK Government is not even on-track to meet its inadequate targets. The 2008 Climate Change Act is outdated. The CEE Bill would bring things up-to-date in terms of aviation, shipping and consumption emissions. It also focuses on protecting and restoring nature and biodiversity. Caroline argues that there are many reasons that businesses need to support the Bill but her key point is that there are no successful businesses on a dead planet. There have been some positive signs in business such as the business network Imperative 21 representing $ 6.6 trillion in revenue. BCorp certification is auditing companies. In fact many businesses are far ahead of government in their response.

John Elkington is a co-founder and non-executive director of Business Declares and best-selling author. His latest book is Green Swans. He views the CEE Bill as being very important catalytically. “It is a signal of the joined-up thinking that we increasingly need in every sector of society”. Political involvement is essential to reconsider markets. The CEE Bill is particularly relevant in the year of COP26. We have to hold global politicians, global business and global financial markets to account in a positive way. Pressure has been significantly brought to bear by youth movements such as Fridays For Future. Going from a degenerative business model to a regenerative model will be a huge step forward.

Bates Wells was the first UK law firm to achieve BCorp certification. It works particularly with charities and social enterprises. The company has always been committed to having a positive impact. In 2019 the company formally recognised the climate emergency and biodiversity crisis and made a number of commitments. These include using the law for environmental change which aligns with support of the CEE Bill. The company has been seeking to reform directors’ duties in a way that would ensure businesses are legally required to operate in such a way as to benefit wider society and the environment. They have also been seeking to clarify charity trustee’s investment duties so that they are empowered to make decisions in relation to their investments to take into account climate heating and biodiversity in the context of their charity’s mission. Stephanie is particularly exciting about the CEE Bill requiring us as a nation to make the changes and commitments needed and create the framework for collective conversations and decision making about how we do that through a Citizens’ Assembly. “One of the things I love about the [CEE] Bill is that it incorporates a Citizens’ Assembly and gives the recommendations that come out of that Assembly real clout”.

Ecotricity was set up in 1995 as the world’s first mission-led, green energy company with a focus on fighting climate change.  “[The crisis] is driven by two things; fossil fuel consumption and animal consumption and if we stop those two things we solve all the problems that we face”. In the three big areas of energy, transport and food there are alternatives. Dale suggests we could be 100% renewable in terms of energy in ten years. The transition will create valuable jobs and make a more resilient economy. We need to stop factory farming and address the habitat loss around the world caused by farming. We can free up 75% of farmland by switching to plant-based diets releasing land for carbon sinks to offset remaining emissions. Governments control the big levers of taxes, subsidies and regulations. At the moment it is rewarding bad behaviour which needs to change. Ecotricity has set a net-zero target in line with Extinction Rebellion of 2025 and Dale believes it can be achieved in two years. 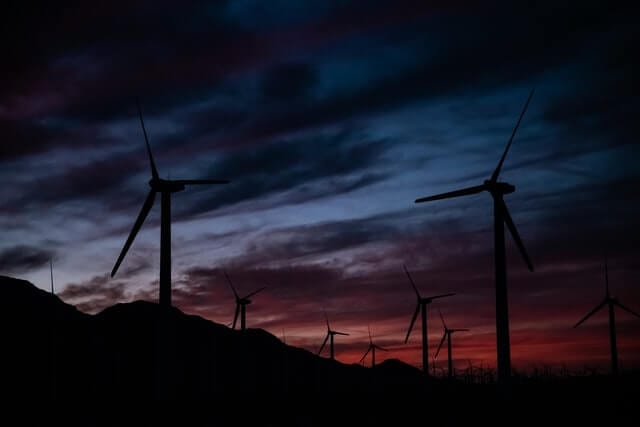 Guy explained that, although farming accounts for only 0.6% of GDP, it contributes between 20-50% of environmental damage. He started growing organic vegetables in 1986 and the business is now owned by 1000 employees and delivers 100,000 vegetable boxes each week. Around 1997, he started a cooperative of local growers and believes this approach can be more productive and efficient. The philosophy behind Riverford is exemplified by wild garlic which produces a similar yield to salad crops whilst supporting wildlife, sequestering carbon and providing visual amenity. Guy’s work also supports small-scale farmers in Uganda through “Send a Cow” which has shown that integrated, diverse organic farming is efficient and effective. Riverford became employee-owned two and a half years ago. Guy believes that “a more equitable distribution of income and fairness and social justice is fundamental to sustainable farming or sustainable business”.

Chris is responsible for sustainability and activism at The Body Shop which operates 3000 stores across 75 countries. It is BCorp certified and has a sustainability strategy based on a Future Fit Business benchmark. The aim is to become a regenerative business over the next 10 years.  Body Shop welcomes the CEE Bill as being holistic, comprehensive and systemic looking at carbon but also at ecology. “Business needs to move away from being less bad and focus on incremental change to being good.” The Bill will drive companies to be accountable to pursue the necessary goals. It will drive internal knowledge and understanding about a company’s actions. Chris believes that business needs to push for regulation as voluntary schemes can only go so far.

There is no formal link between COP26 and the CEE Bill but the conference will give the opportunity of holding discussions and pressuring governments to come up with solutions rather than just making promises. Businesses have a vital role to play. There is also a Biodiversity Summit in May (COP15).

The panelists were asked to give their top action that needs to be taken. There was agreement on the need to stop the use of fossil fuels and taxing it as it leaves the refinery, addressing subsidies and taxing carbon. Also important is addressing the situation as an existential crisis. Targeting the financial sector is also key. There was discussion around how to get finance to support a climate friendly approach. There is potential to target pension funds and charitable investments to hugely shift the dial.

There was discussion around how to mobilise government action. Public pressure is seen to be important.  Caroline talked about how much impact independent SAGE (Scientific Advisory Group for Emergencies) is having in the COVID crisis and whether such a mechanism could be replicated for the CEE crisis.